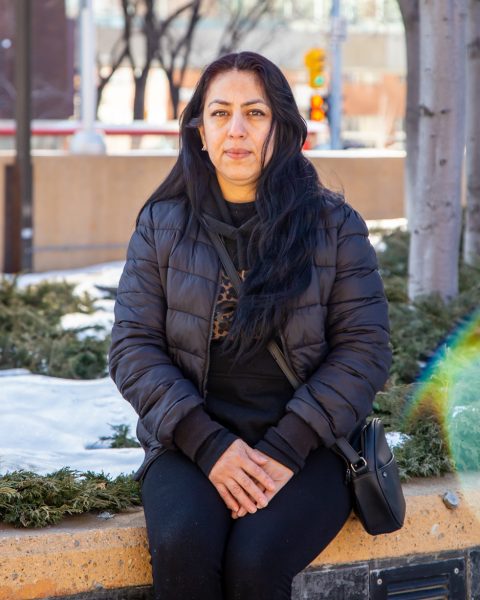 When Angelica and her husband moved to Canada from Mexico 15 years ago, they were hoping to give their daughter a chance at a good education and a better life. Although they arrived in Calgary in the dead of winter, Angelica’s family was happy to start their new journey.

But adjusting to life in Canada was hard. Adapting to a new culture and language proved to be more challenging than they expected. The winter months were particularly cold and snowy that year, which made it difficult to socialize and meet new people. And then, tragedy struck their family in Mexico.

“My father passed away,” says Angelica. “Then, my husband’s brother died. It was a very hard time for us. Not being able to go back to see our family really affected our spirits.”

Life got even harder when Angelica’s husband was diagnosed with diabetes. Working with an illness took a toll on him, and it was especially hard in the winter, when he had to work outside in the freezing cold. His mental health started deteriorating. After the birth of their second daughter, he tried finding professional help but struggled to express himself.

“He felt very alone,” says Angelica. “He felt like he didn’t have someone who could help him, professionally. He became depressed and was desperate for support.”

Angelica remembers her husband becoming quieter and more subdued. He wanted to improve his English and learn new skills so he could get a better job, but he spent all his time working to pay for his medication and food. His diabetes soon landed him in the hospital with a heart attack, and his mental health rapidly declined.

That proved to be the tipping point.
Angelica was at work when she got the call that her husband had taken his own life. Her world shattered.

“I couldn’t eat or sleep,” she says. “I didn’t want to get out of bed. I felt guilty because I wished I had helped him more. I kept thinking to myself, if only I had spoken to him earlier, if only I had tried calling him one hour before. I was broken, but I kept going for my daughters.

Knowing that her husband was no longer in pain made it easier for Angelica to accept that he was gone. But after his death, she started noticing how many people around her were struggling with their mental health, and how few got the support they needed.

Understanding how important it is that people get the support they need, Angelica became determined to raise awareness for mental health. She wants to prevent another family from experiencing the pain her family went through.

“I can’t bring my husband back, but if I can help even one person by telling his story, then that’s something he would want,” she says. “I don’t want anyone to feel like my husband did—desperate, sad, alone, and like nothing matters.

“My husband won’t be there when my daughters graduate or when they get married. I don’t want anyone else to lose a father to suicide or go through an experience like ours. I know time will heal us, but the experience will never go away. So, I want to help others if I can. Something good has to come out of this.”

From time to time, we all need some help, and that’s okay. If you find yourself struggling with your mental health, please contact 211. This United Way-funded helpline connects you to social services in your community 24/7 by phone, text, or online chat.

Addressing mental health is a key priority for United Way. See how we work to improve the mental health of all individuals and families living in Calgary and area.

Worried that asking for help made her seem weak, Melanie struggled alone before finally getting the help she needed.

Mike lived his life on the streets, selling scraps to survive. As he got older, it became harder to continue.

When Patricia fled abuse, she worried where she and her children could go. Now, they’re finding home.