21% of Calgary’s homeless population is Indigenous

4 out of 10 Indigenous children in Calgary live in poverty

The well-being of Calgary and area’s Indigenous population has been shaped by historical determinants such as the legacy of the residential school system. More than 150,000 kids were removed from their families and sent to residential schools, where they were forbidden to speak their language and practice their culture. Many of the students were forced to do manual labour, while being subjected to physical, sexual, and mental abuse. The last residential school closed its doors in 1996—less than 3 decades ago. Today, two-thirds of urban Indigenous people report being touched by residential schools themselves, or via a family member.

The residential school policy was just one of several policies and practices that suppressed Indigenous culture, identity, and spirituality, resulting in significant loss of language, culture, spirituality, and traditional roles in Indigenous societies. This trauma, which was passed down from one generation to the next, resulted in many Indigenous people in Calgary and the surrounding area struggling to lead healthy, rewarding lives.

With the more recent external, highly-profiled developments, such as the Truth and Reconciliation Commission’s (TRC) nation-wide hearings with residential school survivors and its subsequent report in 2015, United Way is making Indigenous work an organizational priority. Building on the awareness and urgency in the public realm, United Way has an opportunity to showcase Natoo’si and step up to our responsibility in responding to the needs of Indigenous people in a more intentional and comprehensive way that puts reconciliation at the forefront of our work.

United Way is developing an Indigenous Strategy in order to lead by example. To advance this strategy, we’ve created an Indigenous Advisory Committee, which advises United Way staff and management on Indigenous worldviews, perspectives, knowledge, and practices to help with our decision-making processes.

We invest more than $1.8 million in Indigenous programs annually under our Natoo’si Indigenous Healing and Well-being Initiative, which is focused on supporting individuals, children, youth, and families in healing from intergenerational trauma 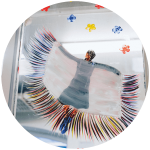 In partnership with Pathways Community Services Association, United Way has developed the Diamond Willow Youth Lodge (formerly known as the Indigenous Youth Hub). Launched in the fall of 2018, the lodge serves as an inclusive, welcome gathering space for Calgary’s Indigenous youth to connect and celebrate their culture in a safe environment.