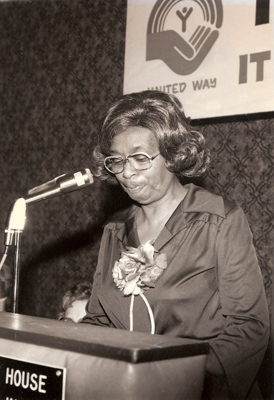 Virnetta Anderson served on the United Way Board as well we United Way’s Speakers Bureau.

Those are all phrases that could be used to describe Virnetta Anderson; however, none of them come close enough to tell her impact on Calgary.

Virnetta was Calgary’s first Black city council member, elected in 1974. Today, the main reception area in the original city hall building is named the Virnetta Anderson Hall in her honour.

While civic politics may be her most notable work, her dedication to community building, advocacy, and volunteerism solidified her legacy. Virnetta served and led countless organizations, including time on the United Way Board of Directors from 1974-1978 and the United Way Speakers Bureau. 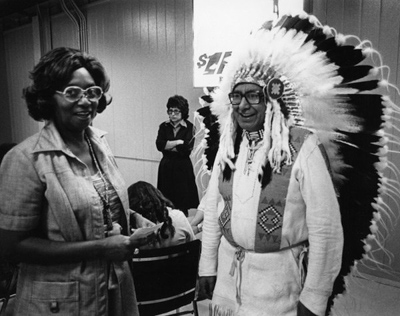 In addition to City Council and United Way, Virnetta volunteered with countless organizations for more than 50 years.

According to Virnetta’s son, Barry Anderson, “She really related to the social issues that United Way promotes. Positive change, creating healthy communities and thriving individuals within those communities, she felt very strongly about what United Way was doing. She always said that it was a good circumstance that she and United Way were very much on the same page.”

After moving to Calgary from Los Angeles in the early 1950s alongside her husband (and Stampeders great) Ezzerett “Sugarfoot” Anderson, she immediately became involved in community work.

“It’s a tradition that started as a young woman in the Baptist church. It comes out of that old, southern church background,” adds Barry. “She was president of the United Church Women, President of the Ladies Auxiliary, and even when she moved into politics, it was a push from several church and community organizers who encouraged her to serve in that way. Her favourite bible verse was Isiah 6:8, ‘Whom shall I send? And who will go for us?’ And I said, ‘Here am I. Send me!'”

Representing northwest neighbourhoods in Ward 3, she was an early advocate for the C-train system, passed legislation that supported public transit, infrastructure, and the arts, and opposed the extension of a Sarcee Train across Weaselhead Flats.

Virnetta was an early proponent of the CTrain system and public transit.

“When she was on city council – she was always concerned about families, communities, and seniors – she wanted to make sure they had an opportunity to thrive and be healthy.

After leaving city council, Virnetta or “V,” as she was known by her friends, she stayed active in the community and was appointed to the Citizen Advisory Committee by Ralph Klein.

She continued her long-standing relationship with United Way, serving as a member of the Speakers Bureau and as a volunteer. As Barry explains, “She felt the issues and the mission of United Way was something she always felt connected to.” She was a great speaker and every audience could hear her old southern drawl that she brought back from Arkansas. Everyone loved the fact that she showed up to speaking engagements in these elegant hats – that’s the southern tradition.”

Virnetta during a speaking engagement with one of her famous hats.

While her need to serve was firmly rooted in her faith and upbringing, Barry says that the acceptance his family found in Calgary was also a decisive factor in her community work.

“I used to ask my parents, ‘why did you stay in Calgary?’ The simple answer was they really loved the people. My parents really loved people, and that’s why they stayed. The overriding sense that I had growing up was we were grateful to be in Calgary.”

Virnetta Anderson passed away in 2006, but her spirit and legacy live on through her tireless efforts in building Calgary into a better place for everyone.

A container-based gardening project seeks to create conversations around community and food insecurity in Forest...

Join us in welcoming Jonathan Wright and Lara Conrad

#DoLocalGood, Community Impact
United Way of Calgary and Area May. 2, 2022

Highlights from the 2021 Community Impact Awards