These local Indigenous artists are using very different mediums to highlight the commonalities that exist between all of us, regardless of cultural background. As National Indigenous History month comes to a close, we had the opportunity to sit down with each artist to discuss their work, and how it is paving the way towards understanding, respect, and trust both between and within Indigenous and non-Indigenous cultures. Read below for inspiring examples of local people doing local good.

Local musician Sandra Sutter was adopted into a loving non-Indigenous family as an infant. It was only later in life that she discovered her ancestral roots and now connects with her Cree Métis culture through music, “We’ve lost so much of our culture that we need to re-learn ourselves.”

Consulting with Elders while writing music is a key part of Sandra’s creative process. Each song from her 2017 album, Cluster Stars, can be introduced through a lesson about Indigenous culture, or a lesson about murdered and missing Indigenous women, “We can bring Elders in to do workshops on every piece of subject matter on the album. So it’s not just an album of music, it’s a tool for learning.”

One of the songs on the album is a spoken word piece called, “The Indian in the Child.” Recounting the story of a young Indigenous boy’s traumatizing experience in a residential school, this beautiful and heartbreaking piece of lyrical poetry paints a disturbingly clear picture of the dark reality that over 150,000 Indigenous children faced between the 1870s – 1990s, while residential schools were operating in Canada:

Kill the Indian in the child they said and to be sure those teachers tried
No language, no family, no culture, every night he cried
A forced haircut and a cruel bath, bleaching brown skin into white
Though they tried to kill the Indian, the Indian survived

-From “The Indian in the Child”

Though her music, Sandra is a trailblazer in our journey towards reconciliation, bringing people together to recognize how similar they actually are, “Through the stories and the songs I write, I seek to tell the personal story that is also personal to everyone else. I’m one little speck on this big planet, and I try to find the commonalities that can exist for all of us in our lives.”

Much of Sandra’s inspiration for her music comes through nature, as it offers her the space to stop and reflect on the things that she has learned. Sandra’s message is simple, yet easy to lose sight of: “I want to remind people that we are so beautiful. The Creator made us beautiful. We forget so quickly. And to make sure that we remember that life is beautiful. It’s a gift.”

Heather Crowshoe and her daughter, Karli, also recognize the need to embrace their culture through art. As a couturier artist, Heather seamlessly weaves strong elements of her Northern Piikani Nation roots together with technical haute couture techniques.

As Heather explains, “There is so much to clothing and textiles in our culture that’s not being accessed by the people. We’ve been working to find ways of bringing that back to life.”

Heather grew up in a traditional way, with close ties to her culture through art, ceremony, and religion playing an important role in her daily life: “I was always interested in watching my grandmas and grandpas and helping them make clothing. They would make clothing for ceremony.”

After more than 25 years of creating powwow regalia and ceremonial clothing with her family, Heather recently established Heather Crowshoe Couture. The aspect of couture clothing that has most appealed to Heather is its focus on designing for each individual.

Heather is currently a student at Ecole Holt Couture, School of Couture Fashion Sewing and Design. She was recently featured in a student profile video, sharing her experiences, vision, and aspirations for the future.

Heather sees fashion as a means to foster reconciliation and connection between everyone: “This is what fashion is, it’s a vehicle that has the potential to take all of this, reconciliation within our own people, reconciliation with other people, with everyone, to get back to the human-ness, because we all need clothing.”

“My true passion, what I really, really want to do, is help other Indigenous knowledge keepers in the discipline of clothing and textiles bring that backinto their community.”

Heather works closely with her daughter, Karli, who creates hats, jewelry, and accessories that pair with Heather’s designs.

Karli’s designs represent more than just beautiful beadwork, “It’s our whole lives that we’ve lived, and my grandparents, and my great grandparents—everyone before us and this is just the surface. It’s at the top of the water and it’s just showcasing a tiny piece of who we are and where we came from, because it’s just so much deeper than that.”

Through her work, Karli helps people tell their story, and in turn learn how to be more open, “Having that piece of clothing, or hat, or whatever it may be, it opens that door for them to grow as well.”

Heather and Karli work with Elders Reg and Rosemary Crowshoe, Heather’s parents and Karli’s grandparents, while designing. Their knowledge and teachings are instrumental in this work: “We ask them about the background—if we want an element to come through we bounce the idea off them and they give us Blackfoot words and deeper meaning, so in that way we learn a lot more.”

Karli emphasizes the importance of reconciliation and of Indigenous people pausing to look inward: “Reconciliation needs to start with our own people. We have the calls to action, we have all these policies, we have land acknowledgements, we have this and that, but where is any of that funding coming from to be put back into the community, to really reconcile our own people with the things that they have lost?” Heather adds, “People need to know how important our culture is and they need to know how to navigate that, because then things aren’t lost.”

See examples of Heather and Karli’s beautiful work on Instagram

Keegan Starlight became interested in art at a young age through the culture that he grew up in. Raised in Tsuu T’ina Nation, he began painting as a child, helping his father paint the family teepee. Now a father himself, art and culture continue to play an important role in his life, beyond his traditional upbringing, “I just want people to understand that there is a lot more to Indigenous culture than what the books have led on. Not everyone is Blackfoot. Not everyone is Stony, not everyone is Tsuu T’ina; you kind of have to be prompted to ask the question beforehand because I feel like there is that stigma out there that I can’t ask an Indigenous person a question because it’s inappropriate.” Keegan uses art as a means to break down these barriers between cultures and open up the doors for candid conversations.

Primarily working in charcoal and acrylic paint, much of Keegan’s artwork is commissioned. Some of his projects include a series of 160 prints for SAIT, a nine-foot-tall painting for the Tsuu T’ina Nation Culture Museum, and most recently a mural at the new Central Library.

Keegan’s three children have been a great source of inspiration for him, and are often present while he is painting. His wife is also an artist, specializing in silversmith.

Showing people the beauty of the everyday has been a primary reason that Keegan ventured into art: “A lot of the stuff that I kind of take for granted, being able to pitch up a teepee with my family, or being able to wrap my kids inside of a moss bag—that’s the kind of beauty that I want to be able to show the people that don’t really understand it. Understanding things like the symbols on teepees…my kids all grew up with it, so it’s one thing to talk about it, but to actually visualize it, that’s what I’m in the business for.” 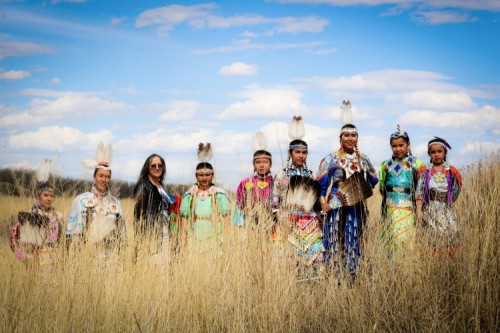